I didn’t mean to stab it. It was an accident 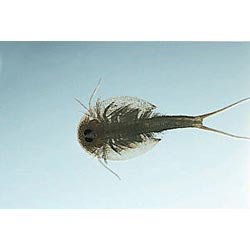 Our son received a kit to grow Triops for Christmas.  They are the Sea Monkeys of today.  We had three – one large and two small ones.  HAD – yes had.

Friends stopped by and Austin wanted to show his lizards and the triops.  I was looking for the large one. When I asked him, he didn’t lie he responded with, “It was an accident… I didn’t mean to kill it.”

There was a kid kitchen knife by the tank. I asked if that was what he used. He was disgusted with me and started to cry. About this time his sister flew to his side defending the accident.  Apparently there was a Wizard of Oz incident.  The castle was accidentally dropped on it when he tried to put it in its little “house.”

I was proud of him for telling the truth. I felt bad that I suspected foul play. I apologized and gave him a hug.